The Sony PlayStation 4 Pro is an amazing gaming console that offers amazing 4K resolution, clear display, sharp pictures and much more in an affordable price. 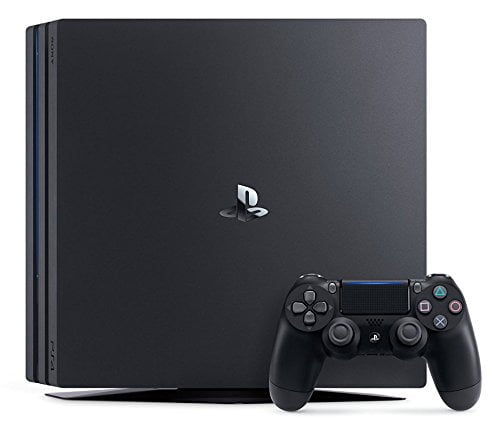 The Sony PS4 Pro is an amazing gaming console that is worth buying as it offers amazing visual effects, clear display and sharp pictures. Additionally, the Supersampling feature of PS4 Pro lets you enjoy crispier 1080p display that looks like a 4K.

Released at the end of 2016, the Sony PS4 Pro has gained lots of attention, appreciation and popularity among PlayStation 4 lovers. In this PlayStation 4 Pro review we will discuss in detail all the aspects including, features, quality, performance and Price of PS4 Pro gaming console which has now become one of the best gaming consoles.

The advanced, though not considered the next-gen, PS4 Pro gaming console by Sony has proved to be the high-performance console that brings all the necessary features. You will be able to experience the most amazing video gaming in 4K and HDR display and excellent frame rates with longer battery life.

In a combination of matte-black color, the PS4 is just similar to its previous PS4 models. Despite this similarity, the Pro is comparatively larger and wider than its previous models as well as Xbox One X and Xbox One S. The parallelogram shaped decks now come with three levels of designs and have the matte plastic color all around the case.

In Normal PS4 consoles the eject and power buttons were touch-enabled, which have, now been replaced with traditional mechanical buttons in Pro. Though a bit odd and one step back, this is good as the touch buttons were sometime pressed unintentionally that needed to be resolved.

On its front side, the console has two USB ports, while the third USB port is one the rear side. The front ports can be used for charging, data transfer and to connect the PSVR or hard external drives. Besides, the console comes with an HDMI output port, an Ethernet output and a digital optical output. To connect the PlayStation camera there is also a connector available on its rear side.

The PS4 Pro console is packed with 1TB hard drive. Since most of the AAA-games occupy more than 60GB, considering this space, you will be able to save not more than 16-20 high graphics game. For more space you can expand the space by upgrading the hard drive. The process is quite simple and easy to sarry out, but the only downside is the huge time spent in downloading and reinstalling the system software.

Without any significant improvements in its specs, the PlayStation 4 Pro comes with same vanilla version of 8-Core AMD Jaguar processor. The processor does not run at 1.6GHz, instead it is now improved with 2.13GHz. Other specs like 8GB GDDR5 RAM are the same.

Interestingly the Sony has doubled the Graphics Core Next Computer Units in the GPU of PS4 Pro. Now, there are 36 units with clock speed more than 900 MHz that was previously at 800MHz which has increased the graphics performance upto 4.3 teraflops. Besides, the key advantage of this powerful GPU is that it allows to run 1080p as well as 4K with smooth frame rates, and more details.

In fact, the HDR offered by PS4 Pro not only provides better color range, but also offered much better contrast ratio, depth of presentation and brightness than an ordinary PS4. Those who have already experienced the HDR video would probably know that HDR video is much better and realistic video. And, when HDR is combined with 4K, the result will be outstanding, in which the 4K will double the resolution upto 2160p instead of 1080p and there will be sharper and clearer video with more details than ever.

Bear in mind, although the PS4 Pro is a powerful gaming console that can run games at 4K resolution, yet it is still far form running games at more than 30fps which means that most of the games running at 4K graphics will run at lower frame rates and lower resolution than you’d expected.

This is really a major drawback that Sony needs to focus and improve in upcoming consoles that are in the pipeline. The lower frame rate is the basic reason that Sony has allowed developers to prioritize the horsepower as to how they want to use it. Some of the game developers offer smoother frame rates while others have better equipped the games in 4K resolution. Even, some of the developers offer both choices and it is up to you as to which way you want to handle the game.

To avoid rendering videos at lower resolution, the brute-force Supersamplig features has been added in most recent 5.5 firmware update. This is much impressive update because, it allows the PS4 Pro console to show 4K videos at 1080p screen by downscaling but the pictures are clear, clean and Full HD that look like 4K.

Aside from the Supersampling mode the Add boost mode that lets gamers to run the games faster than PS4. For even faster and smoother loading of games, the PS4 is equipped with SATA 3 hard drive instead of SATA 2 hard drives.

Interestingly, the PS4 Pro comes with DualShock 4 controller. This newly developed controller is versatile in performance, comfortable in use and comes with left and right bumpers, analogue triggers and sticks, and beautiful glassy light bar at top of touchpad. This light bar, though not appealing, nowadays, is actually pretty helpful in PlayStation Virtual Reality (PSVR) games, in case you are playing game without Aim controllers. The reason is that the camera tracks the position of the DualShock 4 by using the light bar that makes it really helpful.

If i were to choose from the Xbox One X or PS4 Pro, i would definitely choose the PS4 Pro due to its Sony pad that is lighter as compared to its rival, and secondly, due to the comfortable and powerful DualShock 4 controller.

Sadly the Sony has failed to meet its users’ expectations in terms of VR experience. Even, we thought that Sony would focus in improving the VR’s performance features, yet it still needs to do a lot of struggle in this regard. While the issues of blurring and lagging have been reduced to a large extent in this PSVR, it still has failed to make a real difference against Skyrim VR that is offered higher details and frame rates than this model.

The major downside of the PS4 Pro is its problem of switching between 4K gaming and 1st Generation PSVR. The reason is the loss of 4K HDR signal due to the continuous plugging-in and unplugging of HDMI cables. Fortunately, this issue has been resolved in latest PSVR headsets, but if you have an old headset, you have to be very cautious in plugging-in and plugging out to avoid such annoyance.

The Xbox One X is equipped with 4K Blu-ray drive and sadly, this is where PS4 Pro lags behind. The reason might be the price issue as it could shoot price range from $300-$350 to staggering $450 or almost $500. Nevertheless, the PS4 Pro is still able to play the Blu-ray videos and improves the video to make it look like 4K.

The good news about PS4 Pro in 4K streaming is that the popular streaming sites like YouTube and Netflix now allow 4K streaming. While, the sad news is that you still can’t buy 4K versions directly from PlayStation Store.

You may also Like: Best graphics cards for your PC.

We have already told that Sony has given developers the freedom to use the technical abilities of PS4 Pro. Some developers allow to run games in 4K at 30 fps which is really unsatisfactory as it is much below the average frame rate of 60fps. But, if you want to choose 60fps in PS4 Pro you can get this setting in 1080p. As compared to the former setting, the later one offer sharper and clearer picture with more details due to the HDR.

In terms of details and picture quality, the HDR is much better option than 4K. The reason is that the HDR enable devices use impressive lighting effects and give better color variation and higher brightness which ultimately improves picture quality and better visual effects. This is the point that makes PS4 Pro a worth buying gaming console outperforms 4K displays as its hardware is HDR enabled and better equipped to give extra details. (See best gaming monitors for 4K display.)

No doubt the PS4 Pro lags behind the Xbox One X and Xbox One S in terms of GPU process and frame rates and this is where Sony needs to rehearse PS4 Pro. Despite its drawbacks, the PS4 Pro offered stunning graphics and sharper pictures.

The results were surprisingly amazing When we played famous titles like Assassin’s Creed: Origins, Call of Duty: World War II and Star Wars: Battlefront II. The HDR feature gave much improvement to its 4K visuals, picture quality and details. Plus if you have already used standard PS4, you will really feel noticeable difference.

We were amazed to see PS4 Pro’s performance when we played games dedicated for Sony platform, for instance, Killzone 3, Uncharted: The Lost Legacy, Horizon: Zero Dawn and The Last of Us. If you have already played these games on PS3 or standard PS4 the difference will be clear for you to be noticed. Besides, this is much better than Nintendo Switch in every aspect including display, design and performance.

Here is a brief overview of a comparison in performance and benchmark of PS4 Pro, PS4 Slim, and PS3.

Now a combination of all these models.

You can easily notice how sharp and clear images were formed in PS4 Pro than previous models.

Now an overview of PS4 Pro and PS5

Is PS4 Pro Worth the money?

Yes, The Sony PS4 Pro console is worth the money if you are a PS4 lover and already using the standard models. The Pro is comparatively improved console with HDR feature in 4K as well as 1080p. However if you are looking for the most powerful, fast and an amazing 4K console Xbox One X should be on your radar. However, the Xbox One X is at disadvantage in terms of price. On the other hand the PS4 Pro is relatively much affordable than Xbox One and offers somewhat similar features in less price.

The Sony PlayStation 4 Pro is an amazing gaming console that is worth the money by offering amazing visual effects, clear display, sharp pictures. Additionally, the Supersampling feature of PS4 Pro lets you enjoy crispier 1080p display that looks like a 4K.