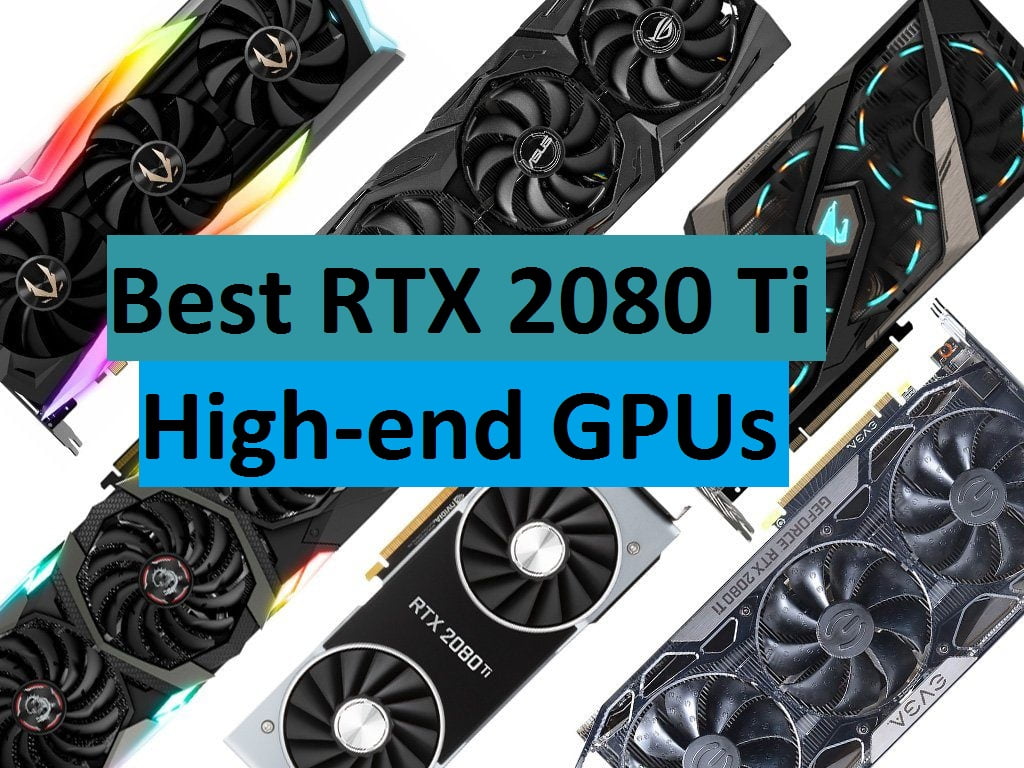 There is no denying the fact that the Nvidia GeForce RTX 2080 Ti is the mother of all the graphics cards. The card has pushed back its previous model RTX 2080 Super in every aspect including performance, graphical-RAM and power. However, the good things aren’t available at a cheaper price and this is unarguably right about RTX 2080 Ti. So, before buying, don’t look for the cheaper models in 2080 Ti, else you may go for RTX 2060 or RTX 2070 Super GPUs for moderate level gaming experience.

Though normally priced at above $1200 mark; the money which, obviously, is enough to buy at good gaming PC, the performance the RTX 2080 Ti delivers is unrivaled. No matter whichever title you are playing, the card won’t disappoint you. So, after you’ve decided to go for this card, the next thing is to find out which RTX 2080 Ti is the best option for you.

Well, the answer to this question lies in your personal preference. However, for your convenience, we’ve listed some of the best RTX 2080 Ti available in the market. The cards are picked based on their performance, reliability, durability, price and brand name. Besides, we’ve added a comprehensive guide and things to consider before buying this card.

A top-notch RTX 2080 Ti from Gigabyte is none other than Gigabyte Aorus GeForce RTX 2080 Ti Extreme. Along with the highest performance potential the card features modern features for the next level gaming.

First thing first, the card comes with core clock speed of 1770 MHz, second in our list after 1815MHz clock speed of Zotac GeForce RTX 2080 Ti AMP Extreme. From the price point of view, the card is priced at $1500. So, don’t expect it a budget model. For Gigabyte lovers, we’d recommend this card if you want something extra from Gigabyte in this price range.

The best part of the card is its boost clock speed of 1770 MHz which is fast enough to enjoy 4K gaming at 60fps or beyond. Besides, the 3x WindForce cooling system keeps the inside temperature bearable even under heavy load.

Design wise, the card has an unmatched look. The company has added aesthetic that is absent in previous models. The beauty comes with this beast in the form of extensive RGB lighting. The card as well as the fans features a fascinating lighting around them.

Last but not the least is the 4-year guarantee of the card for an added satisfaction.

The major complaints about this card are the noisy operation under heavy load and the awkward Aorus engine software which makes it quite difficult to customize the card for newbies.

Overall, the Gigabyte Aorus GeForce RTX 2080 Ti Xtreme is an excellent choice for those looking for high performance 4K gaming.

Zotac GeForce RTX 2080 Ti AMP Extreme is one of our top performing cards in the list. In every aspect, the card is an impressive choice that won’t disappoint you. Featuring all the high-end features the card outperforms its competitors as well its previous models.

Laden with beautiful RGB lighting, the card looks great. The card is equipped with clock speed of 1815MHz which is highest speed in our list. The high speed coupled with IceStorm 2.0 heatsink makes the card run cool even at its maximum speed.

Equipped with latest Nvidia Turing architecture, more cores, and all-new GDDR6 ultra-fast memory, the card is an excellent choice for those looking for more power and performance from the high-end RTX 2080 Ti. Granted, the card is capable of overclocking, you won’t feel the need to overclock it due to its incredible performance under normal speed.

The best part of the card is the excellent heat dissipation mechanism. The large, thick aluminum fin stack array and 8mm copper heat pipes work in harmony to remove heat from the system and keep system cool under heavy load. Plus, the metal backplate provides sufficient support to the whole card.

Connectivity wise, the card comes with 1x USB Type-C port, PCI Express 3.0 connections, 3x DisplayPort 1.4, and 1x HDMI 2.0B. Due to its USB Type-C port the card is VR ready.

The downsides of this card are the length and width issue as this is a big card and might not fit in Micro ATX builds. The second problem is the price

Overall, the Zotac GeForce RTC 2080 Ti AMP Extreme is an excellent choice for those who want an uncompromised 4K, 1440p gaming at 144Hz refresh rate.

Without a single shadow of doubt, the Asus ROG Strix RTX 2080 Ti OC edition is the best card for 4K gaming at ultra-settings. Every feature the card comes with is appreciable and perfect for top-notch gaming experience.

The clock speed of 1650 MHz might seem less than Gigabyte’s Aorus Xtreme and ZOTAC’s AMP Extreme, the speed combined with its OC mode make it a quick grab for gaming. In OC mode, the card can be boosted to 1665 MHz.

What makes it a stand-out card in the list is its dual BIOS setup. The feature allows the gamer to configure the speed of the fans to optimize cooling and noise levels. The cooling efficiency of fans is further improved with its triple Axial-tech fan setup. For most of the gamers using this card, the lowest temps were recorded when both features worked simultaneously.

Design wise, the Asus ROG Strix OC edition is a bigger card than the standard cards. The card occupies 2.7 output slots and takes up around 306mm space. The card shrouds all-black design, which is a wonderful aesthetic and works like a charm in almost all the PC builds. The appealing design combined with RGB lighting strips around the case to illuminate the surrounding makes it difficult to reject on the basis of look and style.

For better gaming experience, the card comes with some amazing features such as Asus’ FanConnect II, Super Alloy Power II components and MaxContact technology. The 0db technology further prevents noise while the fans are operating. The good thing is that the card is powered with 4352 Cuda cores, 11GB of DDR6 and Nvidia’s Turing architecture.

The minor downside is its large size that means it is not suitable for small form factors. Next is the higher than expected price which usually prohibits a gamer looking for the best budget RTX 2080 Ti.

Overall, this is a long, heavy, and bulky graphics card available at cheapest possible price. Calling it a beast is an understatement. The performance allows for 1440p at 100+ fps and 4K at 60-70 fps depending on the title you are playing.

Next graphics card in our list is EVGA GeForce RTX 2080 Ti Ftw3 Ultra, a card that won’t take much from your pocket while delivering the same highest performance. Every gamer knows that the EVGA is famous for manufacturing the best performing Nvidia graphics cards in the market; and the EVGA’s 2080 Ti FTW3 Ultra one is no exception in this regard.

Even if your previous experience hasn’t been good with EVGA, try this card. Its wide range of compatibility, excellent performance, and great aesthetic would definitely give you a go ahead for this card. Rest assured, the card features one of the higher clock-speed of 1755MHz to run the high-end games with smoother frame rate.

Next thing is its full-fledged cooler design for a comprehensive cooling mechanism. The bright side of this card is its size. Measuring at 302mm length, the card fits perfectly for almost all the medium to large PC builds as well as some small ATX PC builds.

Overall, the EVGA GeForce RTX 2080 Ti Ftw3 Ultra is a food choice if you are looking for the best value card for optimum gaming performance.

MSI needs no introduction when referring to the high-end RTX 2080 Ti cards. Being a flagship graphics card, the MSI Gaming GeForce RTX 2080 Ti sports all the features necessary for the next level gaming experience.

The GPU is equipped with boost clock speed of 1755 MHz that is almost parallel to its competitors like EVGA and ASUS. MSI has also added its signature TRI-FROZR thermal design for better heat dissipation and excellent cooling system with almost zero noise output in normal gaming.

The card also features RGB zones to amazingly illuminate the casing. The lighting zones are customizable and can be configured using MSI’s software.

The downside in its design is the massive size. Measuring at 328mm the card consumes three slots which is why we won’t recommend it for small or medium sized PC builds. Before thinking about this card, just make sure that your system can accommodate this beast.

The bright side is that the large size has a bigger heatsink that allows better airflow. This significantly reduces the temps even under heavy load and gives you an advantage to overclock the card at its maximum level.

The best part of this card is the affordable price tag. In fact this is one of the affordable RTX 2080 Ti GPUs in this list. The good thing is that you can buy it on installment basis by Amazon’s five monthly payments.

So, if you are looking an RTX 2080 Ti with balanced price-to-performance ratio, the MSI Gaming GeForce RTX 2080 Ti is the right decision you can make. The card offers excellent in-game performance and is a good choice to save some bucks.

Other than the Best RTX 2080 Ti, you may also need the following gaming accessories: